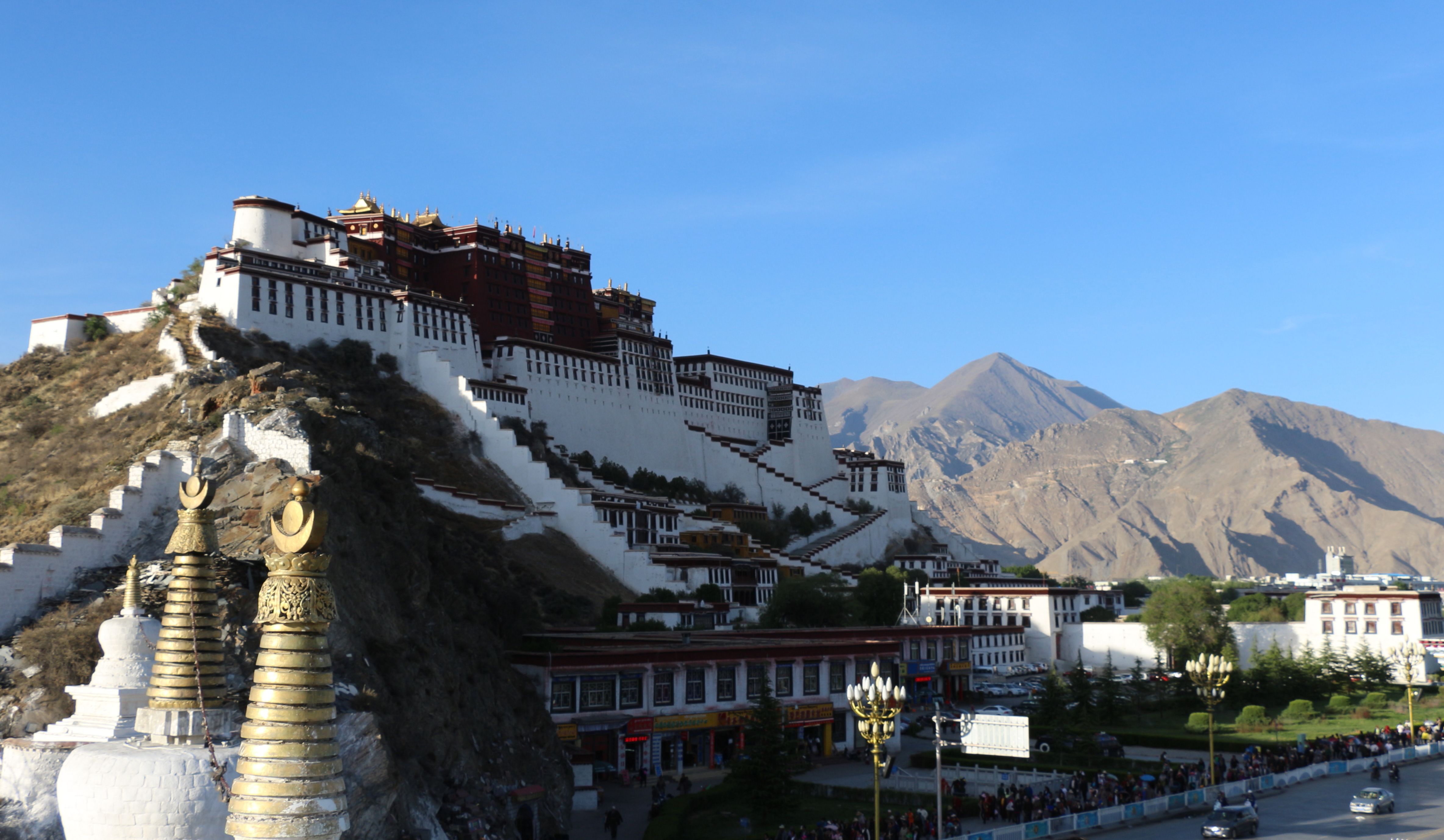 Introdution
Lhasa is a city and administrative capital of the Tibet Autonomous Region in Southwest China. The main urban area of Lhasa is roughly equivalent to the administrative borders of Chengguan District, which is part of the wider Lhasa prefecture-level city, an area formerly administered as a prefecture.

Lhasa is the second most populous city on the Tibetan Plateau after Xining and Xinjiang, at an altitude of 3,490 metres (11,450 ft), Lhasa is one of the highest cities in the world. The city has been the religious and administrative capital of Tibet since the mid-17th century. It contains many culturally significant Tibetan Buddhist sites such as the Potala Palace, Jokhang Temple and Norbulingka Palaces.

Origin
Lhasa literally means "place of the gods" in the Tibetan language. Ancient Tibetan documents and inscriptions demonstrate that the place was called Rasa, which either meant "goats' place", or, as a contraction of rawe sa, a "place surrounded by a wall," or 'enclosure', suggesting that the site was originally a hunting preserve within the royal residence on Marpori Hill. Lhasa is first recorded as the name, referring to the area's temple of Jowo, in a treaty drawn up between China and Tibet in 822 C.E. 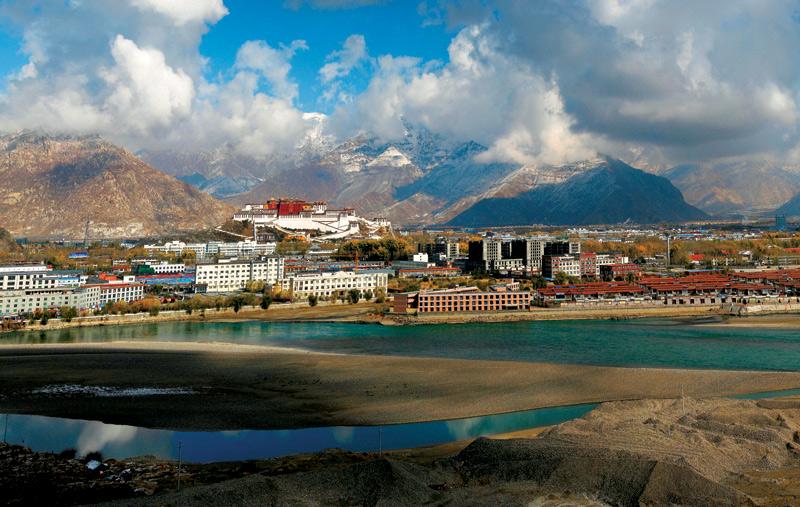 Geography
Lhasa has an elevation of about 3,600 m (11,800 ft) and lies in the centre of the Tibetan Plateau with the surrounding mountains rising to 5,500 m (18,000 ft). The air only contains 68 percent of the oxygen compared to sea level. The Lhasa River, also Kyi River or Kyi Chu, a tributary of the Yarlung Zangbo River (Brahmaputra River), runs through the southern part of the city. This river, known to local Tibetans as the "merry blue waves", flows through the snow-covered peaks and gullies of the Nyainqêntanglha mountains, extending 315 km (196 mi), and emptying into the Yarlung Zangbo River at Qüxü, forms an area of great scenic beauty. The marshlands, mostly uninhabited, are to the north. Ingress and egress roads run east and west, while to the north, the road infrastructure is less developed.

Administration
Chengguan District is located on the middle reaches of the Lhasa River, a tributary of the Brahmaputra River, with land that rises to the north and south of the river. It is 28 kilometres (17 mi) from east to west and 31 kilometres (19 mi) from north to south. Chengguan District is bordered by Doilungdêqên District to the west, Dagzê County to the east and Lhünzhub County to the north. Gonggar County of Lhoka (Shannan) Prefecture lies to the south.

Architecture and cityscape
Lhasa has many sites of historic interest, including the Potala Palace, Jokhang Temple, Sera Monastery and Norbulingka. The Potala Palace, Jokhang Temple and the Norbulingka are UNESCO world heritage sites. However, many important sites were damaged or destroyed mostly, but not solely, during China's Cultural Revolution of the 1960s. Many have been restored since the 1980s.

The Potala Palace, named after Mount Potala, the abode of Chenresig or Avalokitesvara, was the chief residence of the Dalai Lama. After the 14th Dalai Lama fled to India during the 1959 Tibetan uprising, the government converted the palace into a museum. The site was used as a meditation retreat by King Songtsen Gampo, who in 637 built the first palace there in order to greet his bride Princess Wen Cheng of the Tang dynasty of China. Lozang Gyatso, the Great Fifth Dalai Lama, started the construction of the Potala Palace in 1645 after one of his spiritual advisers, Konchog Chophel (d. 1646), pointed out that the site was ideal as a seat of government, situated as it is between Drepung and Sera monasteries and the old city of Lhasa. The palace underwent restoration works between 1989 and 1994, costing RMB55 million (US$6.875 million) and was inscribed to the UNESCO World Heritage List in 1994.

The Lhasa Zhol Pillar, below the Potala, dates as far back as circa 764 CE. and is inscribed with what may be the oldest known example of Tibetan writing. The pillar contains dedications to a famous Tibetan general and gives an account of his services to the king including campaigns against China which culminated in the brief capture of the Chinese capital Chang'an (modern Xian) in 763 CE during which the Tibetans temporarily installed as Emperor a relative of Princess Jincheng Gongzhu (Kim-sheng Kong co), the Chinese wife of Trisong Detsen's father, Me Agtsom.

Chokpori, meaning 'Iron Mountain', is a sacred hill, located south of the Potala. It is considered to be one of the four holy mountains of central Tibet and along with two other hills in Lhasa represent the "Three Protectors of Tibet.", Chokpori (Vajrapani), Pongwari (Manjushri), and Marpori (Chenresig or Avalokiteshvara). It was the site of the most famous medical school Tibet, known as the Mentsikhang, which was founded in 1413. It was conceived of by Lobsang Gyatso, the "Great" 5th Dalai Lama, and completed by the Regent Sangye Gyatso (Sangs-rgyas rgya-mtsho) shortly before 1697.

Lingkhor is a sacred path, most commonly used to name the outer pilgrim road in Lhasa matching its inner twin, Barkhor. The Lingkhor in Lhasa was 8 kilometres (5.0 mi) long enclosing Old Lhasa, the Potala and Chokpori hill. In former times it was crowded with men and women covering its length in prostrations, beggars and pilgrims approaching the city for the first time. The road passed through willow-shaded parks where the Tibetans used to picnic in summer and watch open air operas on festival days. New Lhasa has obliterated most of Lingkhor, but one stretch still remains west of Chokpori.

Next: No next link