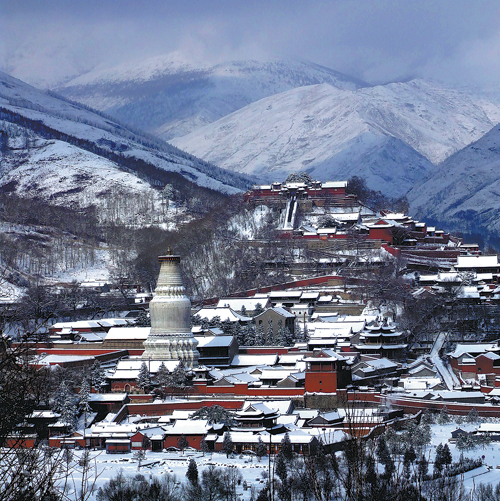 An early January snowfall in Shanxi forced Li Jianing and his family from Hebei province to deviate from their planned route. But they ended up getting to see the sacred Buddhist site covered in white. It was a stunning, tranquil sight that filled them with peace and joy, Li said.

In winter, Wutai Mountains, which has been listed as a UNESCO world cultural heritage site, is more than just a sight for sore eyes. During the weeklong Spring Festival holiday, starting on Jan 24 this year, the scenic area will put on Buddhist Music performances each day at Pusading Temple and Shuxiang Temple. Monks will perform Buddhist tunes using more than 10 musical instruments including flutes and drums.

The Buddhist Music of Wutai, listed among national-level intangible cultural heritage, has a long history. It is passed down orally and incorporates musical pieces popular in different periods since the Tang Dynasty (618-907), according to a website run by China's intangible heritage protection center.

Wutai Mountains launched its Spring Festival celebrations program back in 2002. It provides an escape for urbanites who want to celebrate the holiday in the traditional ways, according to the scenic area's website.

In recent years, hundreds of thousands of visitors have spent their Spring Festival holiday at Wutai Mountains annually, which local hotel owner Bian Zhiguo described as "a land enfolded in Buddha's light".

Located in northeastern Shanxi, Wutai Mountains is one of the major four Buddhist mountains in China. The others are Mount Emei in Sichuan province, Mount Jiuhua in Anhui province and Mount Putuo in Zhejiang province.

The name "Wutai", literally meaning five terraces, stems from the fact that each of the five mountains that constitute Wutai has a flat peak. The North Terrace is the highest of the five, with an altitude of 3,061 meters.

The mountains make an ideal habitat for flora and fauna, home to 661 varieties of plants and almost 350 species of animals. They include beech martens, leopards, foxes and black-browed reed warblers, according to the scenic area's website.

In summer and autumn, cattle and horses can be seen grazing on the slopes and terraces. Every year, a fair is held throughout the sixth lunar month to trade cattle, horses, mules and donkeys.

Wutai is also a rich repository of human legacies. For more than 1,600 years, it has been one of the most important Buddhist sites in China. The attraction receives some 3 million visits every year.

Visitors get to see more than 30,000 Buddhist figures at Wutai, either carved, cast, painted or embroidered.

A whole ensemble of stelae, plaques, couplets and poems catalogs the Buddhist tradition at Wutai Mountains.

Among the authors, Emperor Kangxi during the Qing Dynasty (1644-1911) wrote 20 inscriptions. His grandson, Emperor Qianlong, composed 39 poems. The imperial patronage also reflects the importance of Wutai Mountains as a cultural and religious site.